Greta Thunberg: An exploration of character 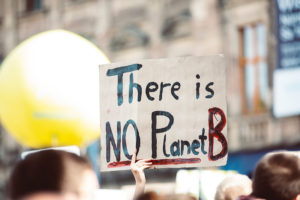 ‘When I was about eight years old, I first heard about something called climate change….I remember thinking that it was very strange that humans,…, could be capable of changing the earth’s climate. Because, if we were…, we wouldn’t be talking about anything else….But. No one talked about it. Ever….To me, that did not add up. It was too unreal.’ (Declaration of Rebellion, Extinction Rebellion, Parliament Square, London, 31 October 2018)

At age fifteen Greta spoke these words to a world audience. In just a short paragraph, Greta communicates an unspoken conclusion that transcends the usual depth of understanding, a journey spanning from her anecdotal, eight year old self, to the fifteen year old she was then.

A fundamental aspect of our growth as young humans is garnered from imitation; and for some of us, a great source of comfort is provided to us by our parents or guardians. Just like when an eight year old wakes from a terrible nightmare, juddering towards their parents’ room–their parents displaying no signs of concern that the nightmare is anything approaching reality is enough to provide a sense of quiet, of stability, of inaction. Everything continues on. The world prevails in security.

But Greta didn’t come to that conclusion.

Born and raised in Stockholm, Sweden,  Greta’s opera-singing mother Malena Ernman and her actor father Svante Thunberg grew increasingly worried about Greta when she displayed signs of depression, and stopped speaking and eating: these signs and symptoms eventually led to her diagnoses of Aspergers, selective mutism and obsessive-compulsive disorder. Greta has, since her rise in the public sphere, spoke openly about these diagnoses: it is no small feat to be a young girl in the eye of the sharkish public to talk of these things. Her open narrative has allowed her to set the dialogue: these diagnoses do not cloud her judgement–instead, these conditions allow her to see clearer than the consensus.

‘I was diagnosed with Asperger’s syndrome, OCD and selective mutism. That basically means I only speak when I think it’s necessary. Now is one of those moments.’

It was in November 2018 when Greta gave her TEDxStockholm speech. The word ‘now’ in this sentence comes out of her mouth with no particular emphasis nor gesticulation. Greta doesn’t need emphasis. Over the course of her time in the public eye, her mannerisms, appearance and tone have been described through all sorts of superlatives; public figure after public figure have accused her of not seeing the world as it really is (Putin states that Greta doesn’t understand the ‘modern world’), of being mentally unwell, abused by her parents (link here), or abusive to her parents. Grown men sit behind a keyboard and unleash tirades against her unsmiling nature, her lack of niceties…essentially, against her every move. She doesn’t know what she’s talking about, they think. The truth is, Greta does. And in her unceremonious tone and speech, Greta knows exactly how to communicate the truth.

Now Greta speaks. Now an audience of individuals settle in to hear the direct, hard facts about climate change. And through the recording of her speech, that ‘now’ stretches out beyond the moment-in-consciousness, and becomes both a call to urgent, direct action to those watching the speech at the moment in time, and a reminder that anyone, anytime can start to make a difference. But it is about the now. No future stability can be accrued through continuing to look around at others and hoping for change. Greta makes it clear that her presence in speaking is a warning in itself: she has something to say, something simple, true, and powerful. It is beyond enough to warrant listening–really listening.

‘I have Aspergers syndrome, and to me, almost everything is black or white. I think in many ways that we austistic people are the normal ones and the rest of the people are pretty strange. They keep saying that climate change is an existential threat and the most important issue of all. And yet they just carry on like before. If the emissions have to stop, then we must stop the emissions. To me that is black or white. There are no grey areas when it comes to survival. Either we go on as a civilisation or we don’t.’ (date etc)

What rings incredibly strongly through Greta’s speeches is her capacity for cognitive strain. Instead of accepting what feels easy, what feels comfortable, what everyone else seems to accept, Thunberg displays an incredibly wide scope for critical thinking.

It is statements such as ‘If the emissions have to stop, then we must stop the emissions’ that has led to her criticism; people argue it is overly simplified, too naive. The chiastic sentence is persuasive and conveys the urgency that Greta believes we as a collective need to feel in order to generate change; Greta’s appreciation for the difficulties and the intricacies of reversing profound climate change is acknowledged repeatedly throughout the rest of her speeches. Yet this is overlooked by many of her critics. As Jemima Lewis argues, for example, ‘Ideological purity has always been the vice of the young. The belief that the right path is ‘simple’ or ‘obvious’ can only exist in those who have not lived long enough to experience the law of unintended consequences. Each generation believes it has reached a new peak of enlightenment …Do any of these young activists ever shop online…? Do they realise what environmental damage they do every time they look at their phones? Powering the internet generates the same carbon footprint as the global aviation industry.’ While valid, Lewis’ argument entirely points out the very complexities that Greta wants to undo: the rotten roots that make everyday life inseparable from the corrupted superstructures and institutions which rely solely on money and cast away any care for our earth. As Greta has stated herself, ‘Until you start focusing on what needs to be done rather than what is politically possible, there’s no hope. We cannot solve a crisis without treating it as a crisis….And if solutions within this system are so impossible to find then maybe we should change the system itself?’

Even Lewis’ reasonable identification earlier on in her article about the progress of the past generations finds itself fallen into a contradictory hole: ‘What about the millions lifted out of poverty on the watch of the older generation? What about…the dramatic improvements in global health and literacy? Is all this part of the Great Betrayal?’ Of course, Lewis is referring to Thunberg’s repeated motif of ‘how dare you’. But Lewis’ wider article seems to overlook her own acknowledgement of how each generation of new enlightenment has led to progress, fronted by a sense of clarity, a reflexive sense of what needs changing and how this can be demanded. It is history itself that paves the way for knowing how this change can be inspired; and Thunberg’s speeches frequently acknowledge the wealth and security of wealthier countries like Sweden and the UK. But where Lewis’ argument concerns itself with local progress, Greta casts her mind to an issue without borders in a world obsessed with them, and the disproportionate global inequality and how climate change issues impact those with the least: ‘…Does no one ever speak about the aspect of equity, or climate justice, clearly stated everywhere in the Paris Agreement and the Kyoto Protocol, which is absolutely necessary to make the Paris Agreement work on a global scale? That means that rich countries need to get down to zero emissions, within six to twelve years, so that people in poorer countries can heighten their standards of living by building some of the infrastructure that we have already built. Such as roads, hospitals, electricity, schools and clean drinking water. Because how can we expect countries like India or Nigeria to care about the climate crisis if we, who already have everything don’t care even a second about it…?’

Greta’s rhetoric might occasionally paint out the world and its solutions as simple, but she is in fact aware it is anything but; her speeches are laced with subversions, undermining similes, mimetic of the cognitive dissonance buried in our collective conscience:  ‘…I don’t want your hope….I want you to panic….I want you to act as if our house is on fire. Because it is.’ So when Thunberg asks to simply ‘stop the emissions’, the diacope is simply reinforcing that somehow, in whatever sense possible, change needs to come; Greta is hoping to inspire that revolutionary outlook, as right now it is not possessed by the collective conscience, and without it– and this is the simple bit, for Greta— there is no future.

‘…Some people–some companies and some decision-makers in particular— have known exactly what priceless values they are sacrificing to continue making unimaginable amounts of money’.

‘You don’t listen to the science because you are only interested in solutions that will enable you to carry on like before.’

If these above sentences alone don’t impart Thunberg’s acute perception of the entangled labyrinth between power and knowledge, the inseparability of action from negative effect in our current climate, and how inaccessible any sense of command is to the masses, I’m not sure what does.

This blog was written by Anna